Notch receptors anchor a highly conserved signal transduction system used to communicate information between cells that contact each other. These signals influence a wide spectrum of cell fate decisions, both during development and in adult organisms, yet dysregulated Notch signaling has been implicated in the pathogenesis of a number of human cancers. The Notch proteins are single-pass transmembrane receptors that convey signals upon activation by transmembrane ligands expressed on neighboring cells. Ligand binding initiates signaling by triggering a process called regulated intramembrane proteolysis, releasing the intracellular part of Notch (ICN) from the membrane. In canonical Notch signaling, ICN ultimately enters the nucleus, where it assembles into a transcriptional activation complex to induce the expression of Notch target genes (Figure 1). 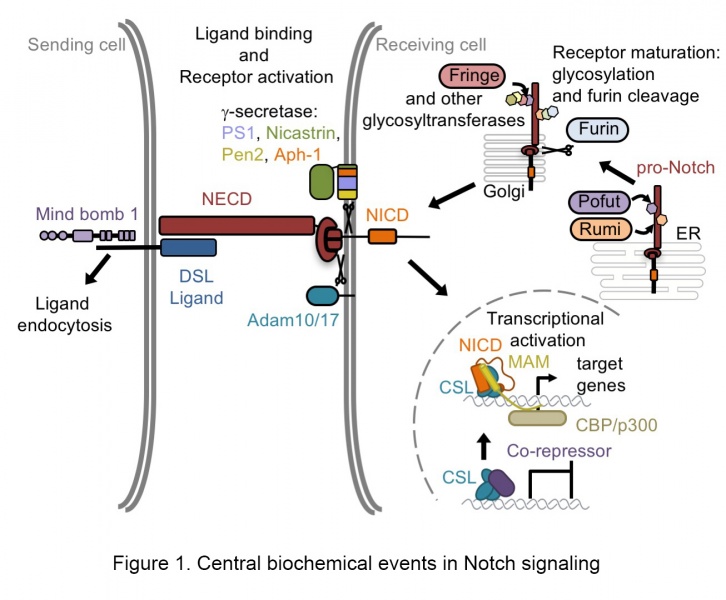 Our current efforts are directed toward answering a number of unresolved questions about how other proteins genetically implicated in the Notch pathway modulate signaling in normal and cancer contexts. Priorities include understanding the the molecular mechanism of normal and pathogenic activation by ADAM-family metalloproteases, elucidating how Notch cooperates with other factors to control target gene transcription, and understanding how negative feedback regulators fine-tune signaling.

Copyright © 2022 by The President and Fellows of Harvard College.